You deserve the very best in

A mole, also known as a, “nevus”, is a common skin lesion which is composed of pigment cells called melanocytes, and is typically benign (non-cancerous.) Moles can be small or large, single or grouped, flat or raised, bare or hairy, often coloured brown, darker brown, or black. They may appear on any part of the human body. Some moles are desirable as beauty marks, while others can be cosmetically bothersome.

There are three different types of moles. Congenital moles, which are present at birth, affect approximately 1% of children. Acquired moles, which appear during childhood or early adulthood, are often a result of sun exposure, pregnancy or certain steroid drugs. Finally, atypical moles, referred to as dysplastic nevi or Clark’s nevi, are acquired moles with irregular and indistinct borders – and are at risk of melanoma.

It is important to seek professional treatment for mole assessment and removal, as an expert can recognize problematic colour and shape changes. Moles usually show up on the body within the first year of life, but will peak in visibility in the 20s and 30s. The number of sunburns a person has in their life, their genetic predisposition, and melanin in the skin will determine mole development. The more atypical moles a person has, the higher their risk of developing a melanoma (cancer) will be.

Since moles often appear on the face or other visible parts of the body, many people understandably look for options for removal. While some creams on the market promise to eliminate moles, in doing so they can cause scarring; which can be just as troubling as the mole itself, or potentially worse. Consequently, mole removal is best left to a professional.

Here at Q Esthetics Clinics Toronto , we remove moles using a number of methods, including laser mole removal, electrocautery mole removal, and mole excision. The best method of removal will depend on the mole itself. Call one of our two convenient locations today for a free consultation to see which method is right for you.
Our medical staff will check your moles to ensure the right option is carried out for each specific condition.

What is mole excision?

Excision is a surgical solution for moles, usually used to remove moles that are potentially cancerous; however, it can also be used to remove moles for cosmetic reasons. The area is numbed with a local anesthetic, and the mole is removed with a medical blade or incision. There are two types of excisions: shave excisions, and full-thickness skin excisions. Shave excision is a much less invasive procedure, as it uses a sharp razor to precisely remove the mole, essentially shaving it off. In addition, electrosurgical feathering may be performed to eliminate remaining cells and blend the wound’s edges. This method typically reduces the risk of scarring. In the case of atypical moles, a margin of surrounding skin may be removed as well. This helps ensure that the mole does not simply grow back.

Full-thickness skin excision, on the other hand, uses a scalpel to cut down into the skin, reaching the dermal layer (the skin below the outer layer, the epidermis). In addition to the mole, the entire section of skin is removed, in the shape of an ellipse. Stitches are then required to repair this wound, which spans much larger than the mole itself. Consequently, the chances of scarring are significantly increased, although the sutures can be carefully hidden beneath the skin.

Trained specialists at Q Esthetics Laser Clinics in Toronto will do their best to ensure that the appearance of scars is minimized, and that you are comfortable throughout the procedure.

What can I expect during and after the treatment?

Prior to the procedure, the treatment area will be numbed with local anesthesia. Although you may feel pressure on the skin during the treatment, you should not feel any pain. Afterwards, the wound will be covered with a bandage to prevent infection. You should keep it dry for at least 24 hours, replacing the bandage as needed. Avoid exposing the wound to direct sunlight, as it may darken the wound or cause the scar to become more visible.

Initially the wound will be red, which may last for one to two weeks – gradually becoming lighter. It may also feel tender or even burn, and acetaminophen or ibuprofen can be taken to alleviate this pain. It is a good idea to apply an antibiotic ointment, such as Polysporin, to the treated area to speed up healing and reduce the risk of scarring. If full-thickness mole excision is completed, the recovery time will be longer, since it requires the dermal layer of the skin to be cut into. However, most patients are comfortable resuming normal activities shortly after the excision. Because the wound continues to heal over time, it will take up to one year for the scar to completely evolve. 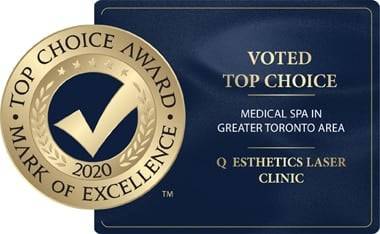 With cutting-edge technologies and a team including cosmetic doctors and nurses, we work with thousands of our patients each and every year, so we can understand how you feel and how to serve your needs better. You may already have problems to deal with, and you’ve likely tried many products to treat yourself at home, experiencing disappointment and frustration. Our experienced medical staff will thoroughly examine your complexion to ensure the right treatment options are offered to you for your specific needs*. There is not one solution that fits all, and your private one-on-one consultation will be the first step to regaining your beauty and health again. Rest assured we offer many different treatment modalities, and if you’ve given up, because of poor results from previous treatments, we will find effective alternatives so that you can begin to see yourself in great shape again.
“With Our BEST, You Look And Feel Your BEST”

Call one of our two convenient clinics today and book your complimentary consultation to find out how we can assist you.

Find A Location Near You